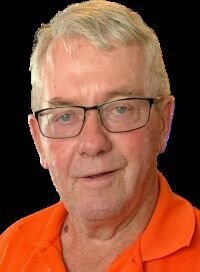 Grant passed away peacefully on January 11, 2023, at the age of 76, at Bennett Centre Long Term Care home in Georgetown, Ontario where he lived for his final year.

Born 1946 in Summerside, PEI, Grant was the youngest child of the late Herbert and Lula (nee Campbell) Buchanan. He was predeceased by his older siblings Aubrey Buchanan (twenty years older) and Ellen Sibbert (ten years older), as well as his first wife, Carolyn (nee Collier) and his second wife, Gloria (nee McCall). He also had loving relationships with Maggie Arsenault of Burlington, Ontario and Connie Arsenault of Kensington, PEI.

Grant was the loving father of Brenda (Don) Brazier of Blue Mountains, Barb (Scott) Fowler of Milton and Christine Buchanan of Toronto, as well as the loving step-father of Maggie’s children; David (Karen) Arsenault of Smithville and Cheryl (Colin) Arsenault of Burlington. He adored his grandchildren; Dr. Jessie Brazier of Vancouver, Samantha Brazier of Calgary, Caeleigh (Aaron) Stanley (nee Fowler) of Wasaga Beach as well as David and Karen’s children Kaleb, MacKenzie and Hunter. In addition, he was delighted to be the great-grandfather of Caeleigh’s five children.

Grant loved life to its fullest until dementia and related complications took over his mind and then body. His earliest job was as a potato picker in PEI. However, he spent most of his working life as a salesman; early on helping to open Consumers Distributing stores across Ontario, then at Pioneer Pools in St Catharines and then finally he settled into a career selling what he loved most; cars, with happy times spent at Skylight Van Conversions, Oakland Ford in Oakville, Ontario and Good Cars, in Burlington, Ontario.

Having a father in the car business was fortuitous for all of the women in dad’s life, especially his daughters, and often for their friends. They had a constant source for excellent deals on used or new cars and they learned early that a new car loses 20-30% of its value the minute you drive it off the lot so buy used!

Throughout his life he loved golf, both playing and watching it on TV. He enjoyed playing cards and dominos and completed many puzzles in his recent years. He loved elephants and old cars. He was passionate about gardening and woodworking, often combining both hobbies. He finished basements, built bars and built countless decks. He also adored dogs. He and Maggie had two cherished dogs when they were together; Cassie, a lovable golden, and then Archie, an impish shih tzu. Grant’s final pet was his adorable (needy?) tuxedo cat, Cujo, now living with Barb and Scott.

Grant split his life between living in PEI and Ontario. He moved to Ontario with Carolyn when he was 17 and she was 18, with the plan of moving to Winnipeg. They stopped in Ontario to visit his brother Aubrey, met friends, was offered a job and decided to stay put. They were married the next year in PEI amongst friends and family. He remained in Ontario until the mid 2010s when he and Maggie moved back to PEI. He met Connie in PEI and remained there enjoying his late career as a superintendent at their townhouse complex, keeping busy fixing things, enjoying his many neighbours and friends as well as his favourite foods; lobster, mussels and scallops! His dementia necessitated a move back to Ontario in 2020 to be cared for by his daughters and then the amazing caregivers at Bennett Centre LTC home.

Cremation has taken place and a small private graveyard service will take place at a later date when Grant returns to his beloved PEI to be put to rest with his parents in Fredericton Cemetery.

If you would like to express your sympathy, the family would appreciate donations being made to the Bennett Centre Long Term Care home where we extend our sincere gratitude to the nurses, PSWs, doctors and many other workers who made his final year comfortable.

Share Your Memory of
Grant
Upload Your Memory View All Memories
Be the first to upload a memory!
Share A Memory
Send Flowers